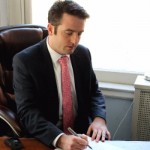 Neil has been a part of Pedersen & Sons since its founding in 1992. When founder William Pedersen’s business partner was retiring, she proposed that Neil work for her so that she could train him to take her place.

Neil wanted to partner with his father and jumped at the opportunity. Neil worked during the day while studying finance. During this time, he honed his underwriting skills and became known as a go-to surety professional who quickly could solve a client’s problems. In 2015, after Neil built his own book of business, he obtained equity in the company and now operates the business as an owner.

Neil knows that that obtaining a surety bond can be stressful. He prides himself on his professionalism and superior surety bond knowledge so the client can devote his or her attention to the underlying case.

Clients who want a superior level of service turn to Pedersen & Sons Surety Bond Agency and know that they will not have to worry about obtaining the surety bond. The firm welcomes clients that want to focus on the practice of law  and preparation of legal arguments instead of performing the duties of a surety bond agent.

Neil obtained his Property and Casualty License in New Jersey in 2010. He has a B.S. in finance from Ramapo College and is certified in risk management (ARM) from the Insurance Institute of America, the insurance industry’s respected knowledge leader.

Neil resides in Manhattan.  In his free time, he explores neighborhoods in search of the highest quality rice balls, soup dumplings and gyros. Neil loves art and has memberships at the Whitney and the Metropolitan Museum. Recently, Neil started seeing operas at Lincoln Center and his favorite to date is Cavalleria Rusticana & Pagliacci.