Undertaking on a Preliminary Injunction Bond 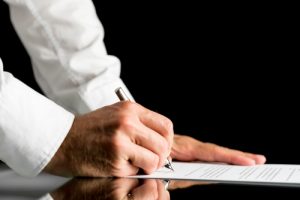 When a client seeks injunctive relief, the judge may require an Undertaking on a Preliminary Injunction Bond. There are a few things to know about this type of bond: it can either be required of the defendant or of the plaintiff, it will enjoin the opposing party or a third party, and it is usually more detailed and longer lasting than the previously issued temporary restraining order (TRO) — upon the posting of an undertaking in a sum that the court determines. Note that the previously issued TRO may or may not have been also bonded.

The court determines the sum by hearing arguments from both parties, or one party if they are going through the ex parte office for an ex parte order. The judge has discretion on what the bond amount should be, with some setting nominal undertakings ($1,000 – $10,000) and others setting much larger undertakings. The bond itself protects the party being enjoined from damages in case the court ultimately decides that the injunction was granted improperly.

In our office, a client who needs to post the undertaking or the bond would provide us with a copy of the court order requiring the bond. Depending on the size of the bond, the client may be required to provide financials. Sometimes if the bond is nominal, the surety will waive the requirement of the financials. The client requiring the bond would also have to execute an indemnity agreement, or a bond application, to obtain the bond, and pay an annual premium. If the bond is required for an electronically filed case, it will be emailed to the attorney so that they can upload it to ecourts. If this is a Federal matter, they require the original bond to be filed.

If the court decides that the injunction was granted improperly, there would be a separate court proceeding to determine the amount of damages if any were sustained by the opposing party.